If Attached File Type is MP4, MP3, AVI or MKV then upload it to Onedrive

See how you can instantly make all your Office 365 users automatically uploading all Outlook attached files of given types (like video and audio files) to OneDrive and replace them by OneDrive shortcuts (aka OneDrive Modern Attachments) instead. (Rules are also available to test the file sizes).

In this usage case, Attach2Cloud has been configured to automatically upload all MS Outlook video and audio attached files to OneDrive and to share them with the recipients of the Outlook email. The process is 100% transparent to the Outlook users.

Attach2Cloud does not even require one single additional click!

This ensures that they can be successfully received by all of their recipients. (No more rejected emails due to exceeding the maximum allowed email size).

Another key advantage of Attach2Cloud is that it allows files to be attached to Outlook emails with virtually no size limit (up to 250 GB (1) per file).

Yes, you read it right! Whatever the limits in terms of maximum email size or maximum attachment size configured in Office 365, Outlook and Exchange, you are now free, thanks to Attach2Cloud, to attach files up to 250 GB unit size (1) to your Outlook emails, without any email size limit!

(1) This 250 GB limit is the maximum allowed size of a OneDrive file. 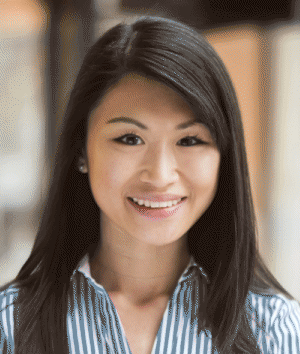 Hi, I’m Yumiko!
Attach2Cloud is installed on my computer. Let me show you how it automatically converts my Outlook video and audio attached files to OneDrive shortcuts.

I just created a new email and attached 3 files (two videos and one audio file). 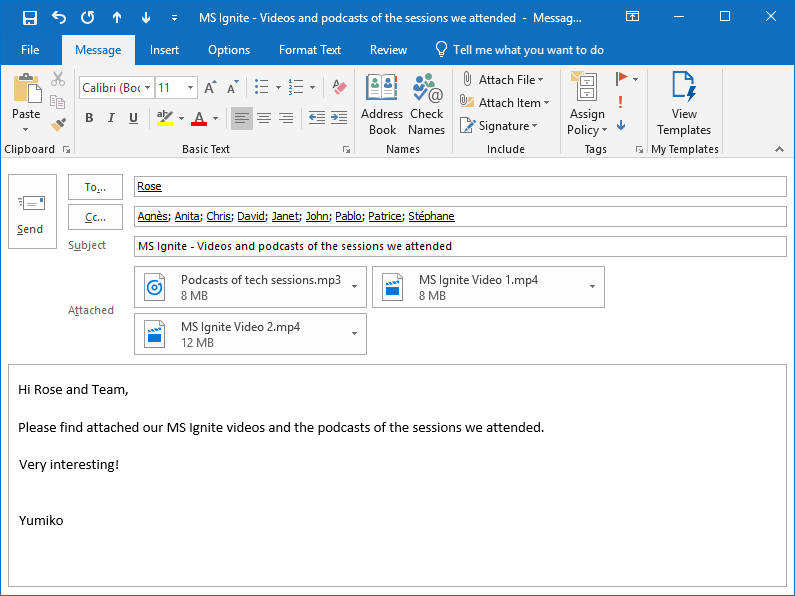 The total size of the files used in this demo remains under the maximum allowed email size limit.
This is on purpose to demo the Attach2Cloud hability to only upload to OneDrive files of given types.

My email is put in the Outbox (like any other email being sent). I can continue working in Outlook, writing sorting and sending other emails.

As you can see by looking at the email being sent, Attach2Cloud is uploading my 3 attached files to OneDrive and displaying the progression of the upload:
“Starting to upload 3 attachments to OneDrive…”

When Attach2Cloud finishes the upload, it shares the OneDrive files with the email recipients and replaces the email attached files by their OneDrive shortcuts. The email is then sent.

All this is 100% automatic and transparent. There is not even one single extra click needed! 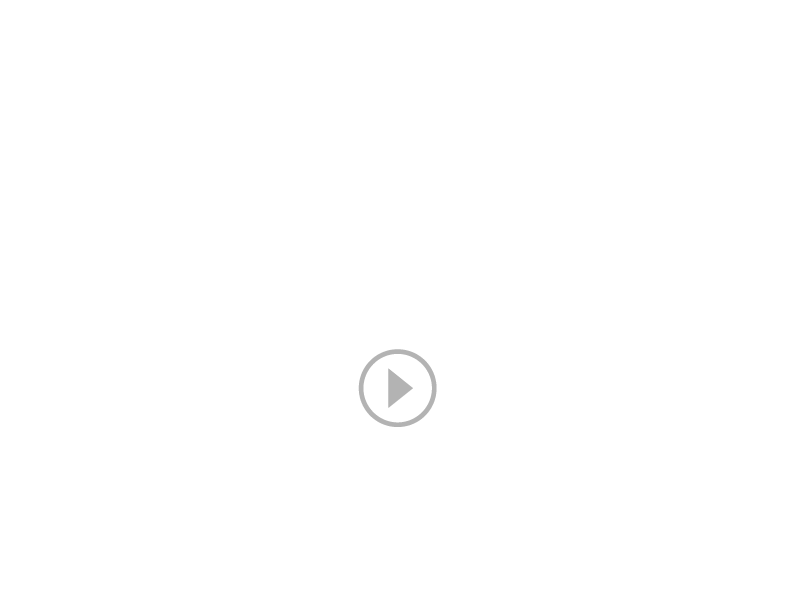 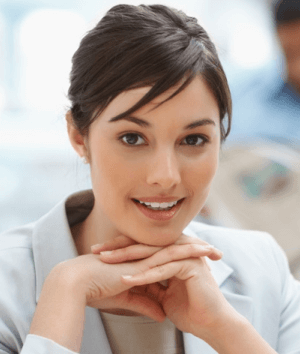 Hi, I’m Rose!
This is the email Yumiko just sent to me. The video and audio files sent by Yumiko have been replaced by OneDrive shortcuts.

The Yumiko’s email size is now 66 KB, although Yumiko sent me more than 28 MB of attached files!

I can open or download the video and audio files Yumiko sent to me by clicking on the corresponding OneDrive Shortcuts.
I of course do not need Attach2Cloud to access these OneDrive files. 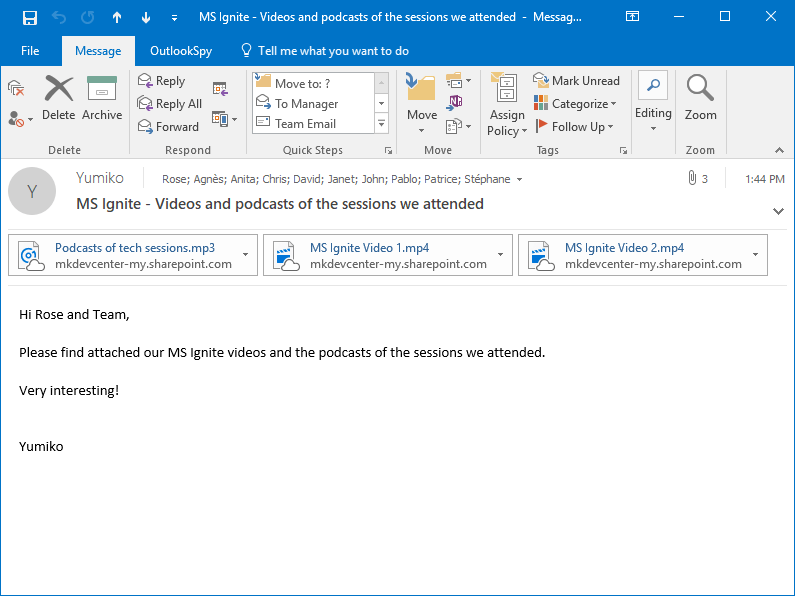 If we look at the email I just sent to Rose and to my other team members in my Outlook Sent Items folder, it contains the same OneDrive shortcuts as those received by Rose and Team.

Thanks to Attach2Cloud, we can now collaborate using the same unique copy of these files stored in OneDrive. 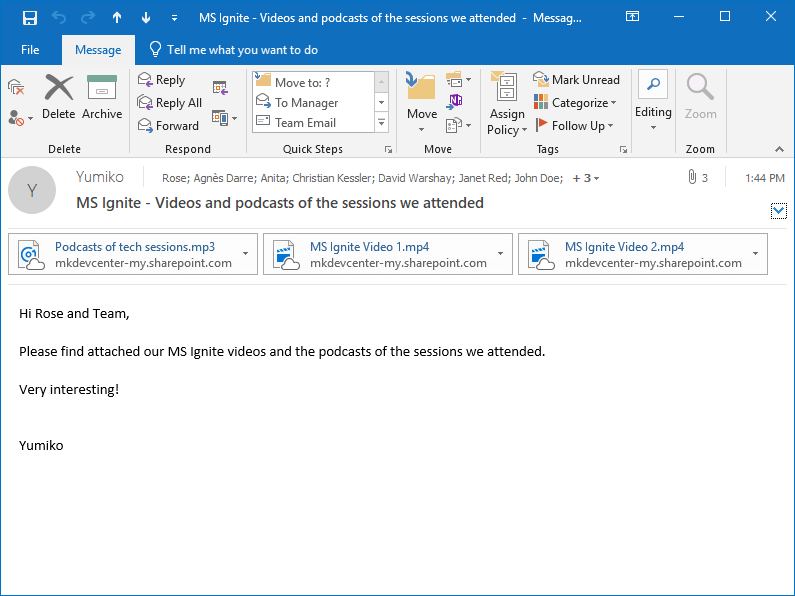 With Attach2Cloud, we now automatically upload all our Outlook video and audio attached files to OneDrive.

Thanks to Attach2Cloud, not only all these problems are behind us, but we are now far more efficient when working with video and audio files; instead of trying to send them back and forth as MS Outlook attached files, we now manage one single copy of these files automatically uploaded and stored by Attach2Cloud in OneDrive.

After some weeks, some Attach2Cloud users asked if we could offer them the option to automatically upload, not only their largest Outlook attached files, but any attached files of their choice to OneDrive.

We thus decided to configure Attach2cloud to allow users to interact with Attach2Cloud at the time they send emails containing attached files.

By using the Attached File Control Center (an Attach2Cloud window displayed when the Outlook users send emails containing attached files), Attach2Cloud users can now, in a couple of clicks, upload the files of their choice to OneDrive (not only the largest), in OneDrive folders of their choice, and, if necessary, set an expiration date and their preferred OneDrive permissions on each of the files to be uploaded to OneDrive.

All our users are now OneDrive Pros, without doing anything but attaching their files to their Outlook emails as usual! 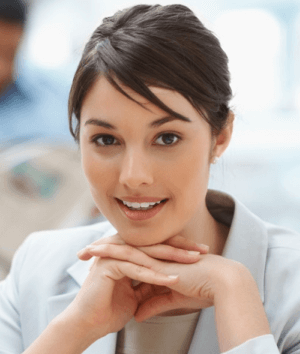 Thanks to Attach2Cloud, all our users have adopted OneDrive without any training and without changing their habits.

We continue to attach our files to our Outlook emails as usual, but we do not need to send them back (after modification) as attachments in response emails. Since attached files are automatically uploaded to OneDrive the first time they are sent (and automatically shared with the recipients of the Outlook email), sender and recipients can work on a single copy of the files stored in the Cloud.

This allows us to benefit from all of Office 365’s advanced collaboration features such as real-time co-authoring in Word, Excel and PowerPoint, integrated version management and selective OneDrive synchronization, on all these files, without having done anything else than attaching them to our emails as usual! That’s really awesome!

Attach2Cloud’s ability to attach files of any size to Outlook emails also appealed to users.

After having limited the maximum allowed email size to 10 to 35 MB, It is funny to advise our Outlook users to attach very large files like 1 GB or even more to their Outlook emails.

Since Attach2Cloud automatically uploads these files to OneDrive and replaces them by OneDrive shortcuts, there is virtually no limit anymore to the amount of files users can attach to their Outlook emails.

Adopting Attach2Cloud enabled us to stop using third-party platforms for the exchange of large and very large files to the benefit of OneDrive. This really makes things easier for our users who do not have to deal anymore with unsecured external platforms to exchange very large files, and for our administrators as well. Attach2Cloud contributed to eradicate Shadow IT.

All this contributed to maximize very significantly our Office 365 investment.