WeTransfer is a very popular free solution to exchange files that are too large to be sent by email, even at the workplace.
However, for Office 365 customers, the IT department provides other, better-supervised tools, such as OneDrive.

The answers to these questions in this article… 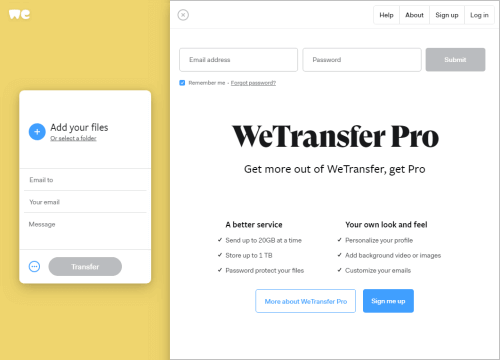 Often accustomed to using it for private use, employees also have the WeTransfer reflex at the workplace. And this, even at Office 365 customers, where OneDrive is installed and available on all user computers.

Indeed, the WeTransfer web service displays a minimalist user interface that is extremely easy to use through any web browser. Uploading and sharing files using WeTransfer is self-explanatory and really straightforward:

Users upload their large files (up to 2 GB) on the platform in just a few clicks. All they have to do then, in order to generate and send an email containing the download links to their files, is to enter the file recipient email addresses and click on Transfer. The uploaded files are stored on WeTransfer for seven days. The recipients of the download links must download the files during this time, before they are automatically deleted.

WeTransfer is therefore ideal for users who need to quickly exchange files too large to be sent by email. It appears to them as an accessible and reliable solution. And on closer inspection, the WeTransfer terms of use are clear and well formalized. Enough to comfort the WeTransfer users in their choice.

If WeTransfer is, for the users, the perfect solution to exchange large files, at Office 365 customers, CIOs find this situation regrettable. Indeed, they are concerned that employees do not make use of OneDrive, that is a major, (if not The Major), component the Office 365 suite, installed on all employees’ computers.

This situation is even more frustrating for the CIOs since OneDrive offers much more advanced capacity, features and options than WeTransfer.

For example, the free version of WeTransfer limits file uploads to 2 GB, and the uploaded files are only available for seven days, whereas with OneDrive, the maximum file size is 250 GB. In addition, OneDrive users can specify for how long they want to keep their files available, or decide to keep them indefinitely if they wish.

Another important point is that WeTransfer does not allow setting different levels of permissions on the files. Anyone in possession of a WeTransfer download link can access the corresponding files.

OneDrive is therefore, technically speaking, a very competitive alternative to WeTransfer in terms of capacity and functionalities. Not even talking about the fact that, contrary to WeTransfer, it can be fully managed by the IT department.

But for the users, the key point is that WeTransfer remains easier to use.

Indeed, the relative complexity of the process of sharing OneDrive documents with other people outside the organization, its user interface that is sometimes confusing, with too many menus and options, and its low level of integration with Outlook are the main reasons that, combined with the lack of user training, can explain the apparently paradoxical user enthusiasm for WeTransfer at some Office 365 customers, and more particularly at those who need to exchange very large files.

…but which jeopardizes the key goals of Office 365 projects. 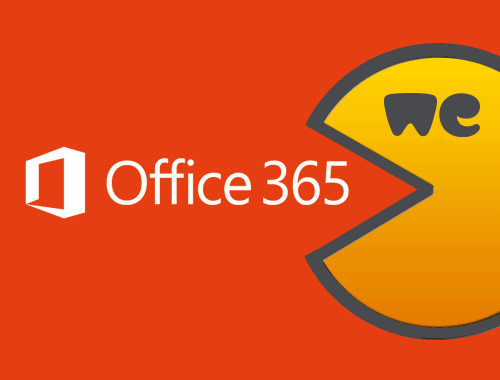 This situation, upsets the CIOs who, after having deployed Office 365, sometimes at great expense, see their users ignoring OneDrive in favor of WeTransfer or other similar services like FileTransfer.io, most often used in Shadow IT mode.

The first reason why CIOs are upset is, of course, the lack of integration of WeTransfer in the company’s information system due to the total absence of administration and supervision options. Plus, given the recent attacks on the platform, CIOs also have legitimate security-related concerns, that are still reinforced by the fact it is impossible to manage and supervise WeTransfer.

And the second one is that Office 365 users dropping out OneDrive (If users don’t even use OneDrive for files too large to be sent by email, then it is very likely that they don’t use it at all), jeopardizes the key goals of CIOs’ Office 365 projects:

Indeed, without OneDrive, most of the advanced collaboration features of Office 365, which make the core of the Office 365 value proposition, remain out of reach to users. Why? Because all these innovative cloud-based features such as online co-edition of Word, Excel and PowerPoint documents, advanced document sharing, version management, protection against accidental deletion, etc. require that users’ documents be stored on OneDrive.

Which alternative to WeTransfer?

For CIOs, filtering or banning WeTransfer would have the negative consequence of alienating users and, incidentally, driving them to use other similar web services, not yet identified or filtered, and probably even less advisable. It is therefore a far from ideal alternative to WeTransfer.

CIOs in this situation must challenge a kind of paradoxical status quo, with, on the one hand, Office 365, having, with OneDrive, an alternative to WeTransfer that is just a mouse click away, very competitive in terms of capacity and features, but too disheartening in terms of ergonomics and integration, and on the other hand, WeTransfer, a simple and quick solution, brought by the users, perfectly fit to solve the problem of exchanging large files (according to them), and which they wish to continue using.

Attach2Cloud, the alternative to WeTransfer for Office 365 customers 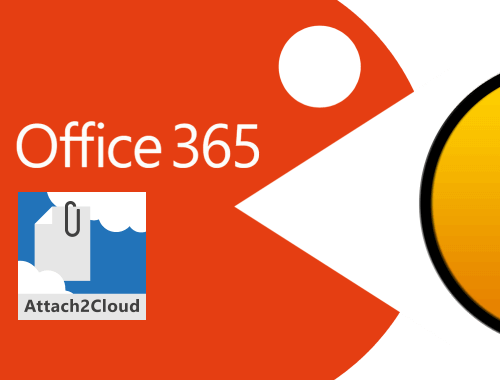 Because it allows to automatically redirect large file exchanges to OneDrive without requiring any user training, Attach2Cloud is the ideal alternative to WeTransfer for all Office 365 customers.

It is very simple: Attach2Cloud is an Outlook add-in allowing Outlook users to attach files up to 250 GB per file (1) to their emails and to upload Outlook attachments to OneDrive automatically or semi-automatically, if needed, according to optional rules based on file size, type, etc.

With Attach2Cloud, Outlook users simply attach their large files to their emails, with no limit neither on the maximum email size nor on the number of its attachments. Their files are then automatically uploaded to OneDrive, shared with the email recipients and replaced by OneDrive shortcuts when the email is sent.

All operations related to uploading and sharing attachments on OneDrive take place in the background when the message is sent. Users can continue to work in Outlook while the attachments are being uploaded on OneDrive. They can even send other emails during this time.

Attach2Cloud also includes numerous additional features enabling Office 365 users to get more benefits from OneDrive. For example, Attach2Cloud users can insert, in one click, invitations to upload files to OneDrive while editing their Outlook emails.

Smoothly get rid of WeTransfer and revitalize your Office 365 project, while improving user satisfaction

Many Office 365 customers are facing OneDrive and Office 365’s advanced cloud-based collaboration features user adoption issues. See our previous post on this topic:
OneDrive: OneDrive: why Office 365 users are so slow to adopt it?

Attach2Cloud provides an answer to this problem: by almost automatically boosting the adoption and usage of OneDrive, Attach2Cloud creates a de facto “seed” effect for the use of the advanced collaboration features of Office 365.

For example:
With Attach2Cloud, Outlook users now exchange OneDrive shortcuts instead of traditional email attachments and can use the Office 365 online co-editing feature by simply clicking on the OneDrive shortcuts attached to their emails. And they’re going to do it for sure because they’re used to clicking on their attachments to open them. And, other cascading benefit of using Attach2Cloud, they will also automatically benefit from Office 365’s version management and accidental deletion protection.

In addition, by relying on OneDrive for file storage and sharing, it gives your users, as well as their external correspondents when necessary, access to all the advanced collaboration features offered by Office 365, such as online co-editing of Word, Excel and PowerPoint documents, advanced document sharing, version management, protection against accidental deletion… which are not available in free file exchange services such as WeTransfer, FileTransfer.io or others.

Fully transparent, Attach2Cloud is a very convincing alternative to WeTransfer that appeals to both users and CIOs:

On the one hand, Office 365 users only have to attach their large files in the blink of an eye, directly in Outlook, without even thinking about it, as they are used to do for other files, in order to upload and share them in OneDrive automatically.

On the other hand, with Attach2Cloud, the IT department can count on a very powerful ally in its fight against Shadow IT, allowing to redirect large file exchanges from WeTransfer to OneDrive, in the secure environment of Office 365 in the Microsoft Cloud, automatically and naturally, without having to enact rules or to fight frontally against users’ risky and counterproductive habits.

Additional to this, seeing users adopting OneDrive effortlessly, and thus finally benefiting from the advanced collaboration features of Office 365 (most of them are built on OneDrive) is, without a doubt, another source of satisfaction for the CIOs, and not the least.

Attach2Cloud offers a secure alternative to WeTransfer, built on Outlook and OneDrive, that does not require your Office 365 users to change their habits.
The only thing users have to do in order to share some (large or small) files on OneDrive is to attach them to an Outlook email and send it.

What could be simpler? 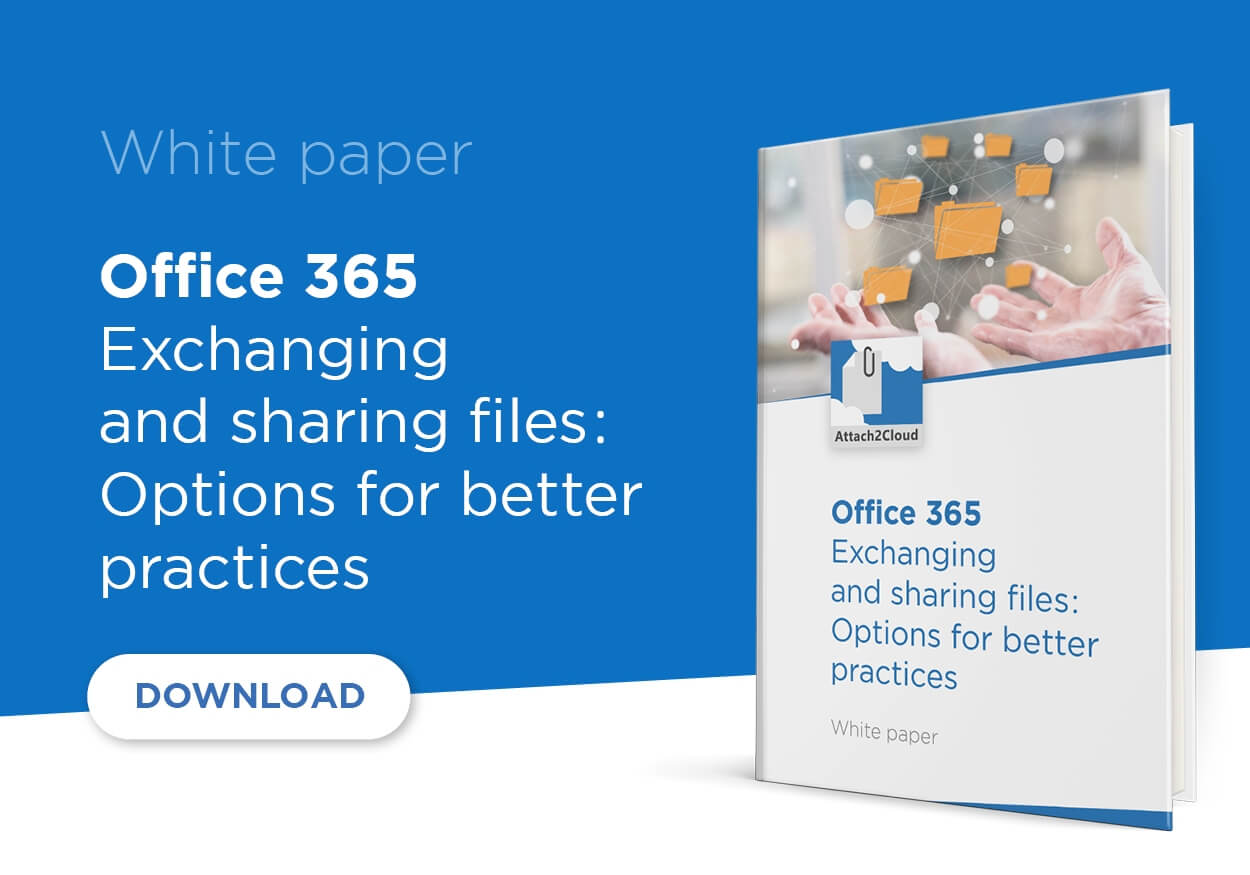 Points of view category
Previous post:
← An alternative to OneDrive for the Office 365 customers?